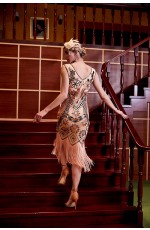 When you think about the 1920s dress Australia, you should also think about the flapper dress. The flapper was a liberated woman. The eye-catching fringe, short skirt and jewellery were part of a rejection of the tradition of the early 1900s. The First World War was just over and this led to some changes in the roles of women. During the war, women stepped in at work for their men and they were not ready to go back to the kitchen. The flapper girl was more about attitude than style.

For flappers, getting out of the house was a top pastime. Drinking, dancing, and partying were all open to young people. Couples used cars to go out alone and this led to a big change in socialisation and dating. The flapper’s quest for attention and freedom defined their different tastes. However, there were some popular celebrities that inspired the flapper dress and here are some of them.

She became a known dancer in Manhattan at fifteen years old. She epitomised the flapper outfit and took the stage by storm with her great dance moves. She had a personality that was deemed rebellious and rude at that time.

Her style followed her ways. She had a bob haircut with straight lines. She dressed in modern styles of the 20s and she was seen wearing a cloche hat pulled down over her bob. She had a style that was more masculine than girly. Her style featured velvet blazers, trousers, deep-cut evening dresses that were worn without a bra, silk blouses and furs. If you are thinking about getting costumes online for the 1920s, this is a great idea.

To achieve her look, wear a pair of wide trousers paired with a light blouse. Make sure the blouse is tucked halfway in. You can also mix a large fur coat with a small dress. If you want to create a bob, you should tuck your hair into a hat.

This was a dancer and showgirl and she was famous for her banana dance which involved shaking the butt – especially in the 1920s. She made close razor-cut hairstyles known and often paired her look with some dramatic eye-makeup.

Her look involved a lot of jewellery paired with a short razor cut to achieve a feminine look. If you want to get her look, you should pair a geometric printed blouse with a blazer or fringe over a short skirt. Josephine baker was about mixing masculine lines at the top and showing off her legs.

This lady was a famous film star who became the first European lady to make it big in Hollywood. She had an exotic appeal and brought new styles with her. She loved headgear including head wraps and turbans. She also made fur boots very popular and introduced the world to the red-painted toenails concept. If you are looking for the 1920s dress Australia, you can get her look by trying a headscarf and pair it with multiple bracelets and a long dress.

Please log in to like, share and comment!
Categories
Read More
Shopping
WHY WHOLESALE VAPE JUICE AND SUPPLIES MAKES SENSE
It doesn’t matter what business it is. Wholesale makes sense. Wholesale vape juice and...
By Iewholesale Wholesale 2022-02-18 09:40:58 0 18
Uncategorized
Amazondumps.com Is providing Best Services for Your IT Exam Preparation with SAA-C02 Dumps
When you are determined to do your best than nothing can stop you to become successful and then...
By David Jerry 2021-04-02 16:08:33 0 161
Uncategorized
Prepare for Cisco 500-901 Certification Exam
Why You Should Get Cisco Data Center Unified Computing Infrastructure Design Certified Cisco is...
By Leon Honey 2019-08-28 12:30:03 0 339
Other
Sports Analytics Market to Reach US $2.8 Bn by 2028: Research informatic
Market Snapshot: -   The Global Sports Analytics Market size is estimated to reach USD 2.8...
By Raj Gupta 2022-05-25 08:48:57 0 8
Health
Weight Loss Programs - Which Is Best For You?
In most cases, the specific weight loss program you choose has little to do with whether you will...
By Parveen Kumar Bhagat 2021-10-25 20:00:09 0 277