5 People Who Got Rich On Sports Betting 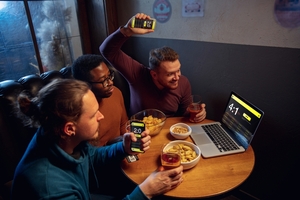 Many are convinced that betting is all about losing money. But there are lots of people who make hefty profits, and in this article we’ll talk about the 5 most famous and richest sports bettors in the world’s history. Examples can be found on the site that compiles the best sports betting in Tanzania.

Tony Bloom has always been interested in betting. Just 8 years of age, he would spend pocket money playing fruit machines. When he was 15, he used a fake ID in order to make bets.

In the university, he was studying math and statistics. At the same time, he was betting - all without success.

Gradually, it dawned on him - if he wanted to succeed in betting, he would need to formulate a strategy.

Tony Bloom was playing a lot of poker in the early 2000s and this is when he got his nickname “lizard” for the cold-blooded decision and overall behavior at the table.

Today, Tony Bloom leads a betting consultancy called Starlizard which employs around 150 employees. Together with these folks, Tony generates valuable tips on the outcomes of the future games. The consumers pay around 11 million pounds every year for this product.

God only knows how much money the firm is turning over every year, but it’s clear that Tony Bloom has been effective using the rules of value betting in order to identify cases when he learns about the odds that are better than what the bookies have! There’s certainly a successful strategy behind each of his decisions as the firm is rumoured to take into account a huge number of variables when generating their tips.

Edward Thorp is among betting pioneers.

A mathematical genius, he started paying attention to various card games in the late 1950s. It didn’t take him much time to figure out winning strategies based on card counting. In a nutshell, his system was based on counting cards in a single pack of cards.

Unfortunately, the casinos today use multiple card packs which leaves this strategy toothless.

At one point, Edward Thorp was almost killed at the order of a casino. Betting can get feisty.

Zeljko Ranogajec comes from Tasmania, Australia. When in university, he got a job at a casino in Sydney. During the breaks, he started to dabble in sme of the games with blackjack being his focus.

In no time, he started to master the art of card counting. This was bringing good profits. The Australian casinos got on to him and he was banned from all casinos on the continent.

No problem. Together with a great team, he started playing in Vegas casinos. But got banned there too.

He went back to Australia with a new drive for betting on horse racing. This was the pivotal moment for his betting career, and his bankroll started to grow immensely. Soon, the house would offer him a huge rebate of around 8-10%. In this way, Zeljko would stay in the green even when he suffered a minor loss.

At one point, his play resulted in the bankruptcy that was too frivolous with the rebates for him.

Jeff Ma has always been good at math, and that's how he found his way into MIT. While studying there, he was approached by the famous MIT Blackjack group which was trying to recruit math geniuses and turn them into money-making machines empowered by the art of card counting.

Jeff was at first reluctant to get into that kind of thing, but gradually he warmed up. After training for just 4 months, he was unleashed on the casinos across California.

And he started making pretty good money. Once, he was followed home by casino employees after robbing the house of $80,000 in one night.

These things got to him, and Jeff Ma decided to switch to business where he's been exceptionally successful by establishing and selling startups to major corporations.

The book and the movie "21" were created about his journey.

His main advice is to always keep cool and keep your emotions under control.

James Holzhauer has always been into sports betting. He's been guiding his strategies by researching probabilities and expected value. In a word, there has always been a strategy behind his actions.

In 2019, he decided that Jeopardy! had to have him as a player. Astonishingly, he managed to win over 33 games in a row, winning over $2.4 million using the same principles he has been practicing in the world of sports betting.

This is a testament to the fact that the betting principles help you hone your skills that you can easily transfer to the other side of your life!