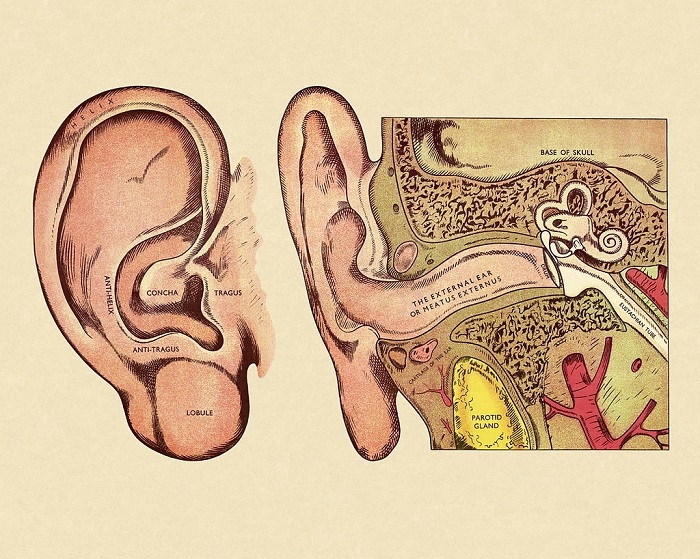 Otitis, the medical term for ear infection, does not sound threatening to a lot of people. However, when the ear gets infected, ear infection symptoms can cause enough discomfort that can compel a person to seek immediate medical attention.

The human ear anatomy has three basic parts, each with unique functions: the outer ear, the middle ear and the inner ear. Categorizing each ear infection and their corresponding clinical manifestations are dependent on the affected part.

Outer ear infection, also known as otitis externa, has a high prevalence among children and swimmers. It is often caused by swimming in polluted water, hence, the term "swimmer's ear". Children tend to scratch their ears often with their fingers or use contaminated objects like cotton buds and this can lead to injury and microscopic tears in ear skin integrity. Children also at times place foreign objects in the ear that can get lodged within the ear canal.

The pinna (the visible part of the ear) and the external auditory canal are commonly affected. The defining classical manifestation of Otitis externa is extreme pain when the pinna is moved. Other outer ear infection symptoms are redness and swelling of the auricles, constriction and itchiness of the external auditory meatus, ear drainage and temporary hearing loss due to ear canal tightening.

Bacterias like Psuedomonas aeruginosa and Staphylococcus aureus, as well as Funguses like Candida Albicans and Aspergillus are the most common pathogens.

Otitis Media is usually a complication of upper respiratory tract infections, which causes inflammation on the tympanic membrane and the eustachian tube. Pathogens can travel from the pharynx to the middle ear via this tube.

For bacterial Otitis Media Streptococcus pneumoniaeis the most common pathogen. Other bacterias such as, Hemophilus influenza and Moraxella catarrhalisare frequent causative agents as well.

Signs and symptoms often subside when the underlying cause is healed. However, the patient may experience severe ear pain due to pressure build-up as a result of fluid accumulation. The Eustachian tube is inflamed that it cannot effectively drain the fluid out. This creates pressure that can force the ear drum to rupture and drainage of fluids and pus can occur. However, perforation can provide pain relief and pressure.

Other middle ear infection symptoms include fever, tinnitus, feeling of fullness within the ear, temporary deafness, and irritability.

Acute otitis media becomes chronic when signs and symptoms persist for more than 3 months and is accompanied with drainage and a perforated tympanic membrane.

Otitis media, upper respiratory tract infections, meningitis and viral infections can spread towards the inner ear. When this happens, the most notable clinical manifestation is vertigo and loss of balance. The inner ear is responsible for maintaining balance during head movements and changes in bodily position. Hence, in inner ear infection (Otitis Interna), serious and debilitating dizziness and balance disarray can occur.

The inner ear is the final stage in which sound waves must pass. It is responsible for converting sound waves into electrical impulses that are transmitted to the auditory cortex of the brain. In inner ear infection symptoms, patients not only suffer from incapacitating loss of balance, but from tinnitus (ringing of the ears) and hearing loss as well. Other symptoms include nystagmus (involuntary, rapid, continuous, repetitive and monodirectional eye movements) due to problems with the vestibular-ocular reflex. Nausea and vomiting, as well as psychological disturbances may occur due to severe dizziness.

To assist healthcare providers with accurate diagnosis, visual observation of the auricles, history taking, as well as documenting ear infection symptoms are all needed by the physician.

Special instruments like an Otoscope (Auriscope) allow visual assessment of the external ear canal and the middle ear especially the tympanic membrane or ear-drum for any anomalies.

For assessing middle-ear function, Pneumatic Otoscope examines the ear-drum's response to air pressure. This test is used to evaluate middle ear fluid accumulation. A Tympanometer is also use for the same purpose, but it uses sound waves that cause changes in air pressure to elicit ear-drum reaction.

For vertigo and balance problems, an Electronystagmography may be performed to determine the condition of theoculovestibular reflex by analyzing involuntary eye movements (Nystagmus).

More advanced tests such as the Auditory Brainstem Response test (ABR) measures the degree of hearing loss, dizziness and tinnitus. Simple balance tests such as Standing Stork Test may be performed with close-in assistance to prevent injury from falls.

For Outer ear infection, topical antiseptic solutions such as Burrow's solution, as well as antibiotic and steroidal ear drops are the accepted methods of treatments. While antifungal azole ointments such as Clotrimazole and Ketoconazole creams are effective against fungal Otomycosis or "Singapore Ear".

For Otitis media infection, the primary antibiotic of choice is Amoxicillin. If drug sensitivity, intolerable side-effects and bacterial resistance occur, the following antibiotic class can be used in the following order: Amoxicillin-Clavulanate, Sulfamethoxazole/Trimethoprim or Co-trimoxazole, Cephalosphorin, Erythromycin and Azithromycin. Surgical procedure such as Myringotomy (ear-drum incision) and Tympanostomy tube emplacement promotes middle-ear fluid drainage and ventilation.

For Otitis interna infection, viral medications, as well as corticoteroidal drugs like Prednisone are prescribed complementarily for infection of viral origin. For bacterial infection, antibiotics such as those used for Otitis media infection may be used as well. Anxiolytic medication such as Diazepam, as well as anti-emetics such as Meclozine and Prochlorperazine are commonly used to relief anxiety, vomiting and vertigo, respectively.

Rehabilitation is an important component of treatment for otitis interna in order to assist patients in gradually recovering their balance, gait and orientation to changes in position and movement.

Depending on the ear infection involved, treatment of ear infection symptoms can be both simple and complicated. To prevent complications from occurring, always consult your physician first as self-medicationcan have unfavorable results.