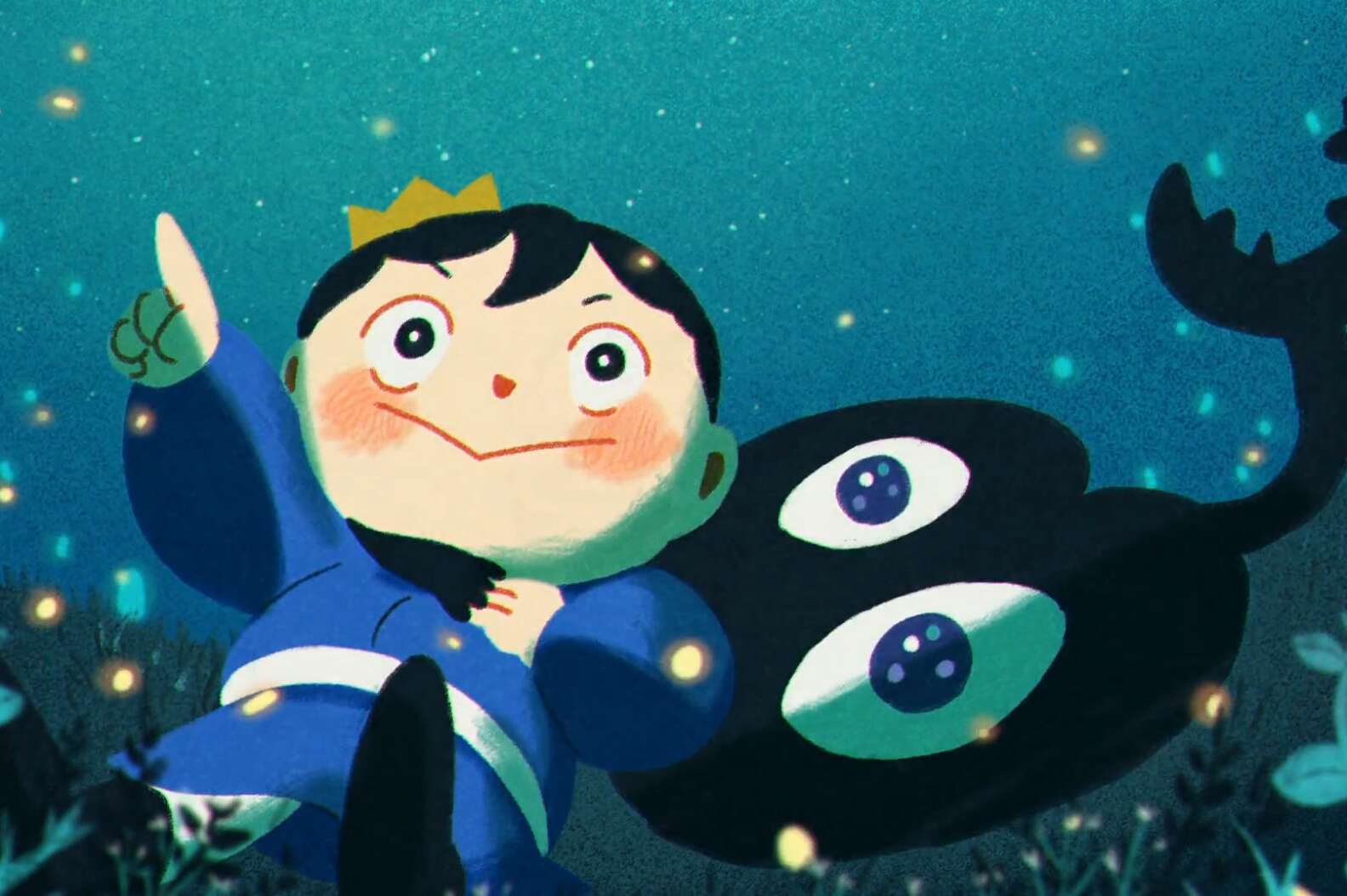 Release date: January 10
Director: Hiroko Utsumi
Animation production: Bones
An original sports anime directed by former Kyoto Animation staffer Hiroko Utsumi (Banana Fish), on its face, Sk8 the Infinity is equal parts radical and ridiculous, and full of the emotional acuity and gentle, good-natured humor that you’d expect from someone whose visual and directorial sensibilities stemmed from work on K-On! and Nichijou. It’s full of vivid, contrasting color and high energy, and simply just great fun from the jump as it depicts a group of hardcore skaters participating in a secret, a no-holds-barred downhill skateboarding competition in an abandoned mine, known as S. But it finds surprising emotional grounding through the relationship between Reki Kyan, a high school sophomore, who introduces new transfer student Langa Hasegawa to skateboarding. Like the best sports anime, Sk8 the Infinity builds interesting rapport between competitors and allies alike, with implicit tension between Reki and Langa as the former begins to feel insecure about how quickly his close friend picks up new skills. For once, the protagonist isn’t preternaturally gifted, and the show finds compelling characterization through the insecurities of hard-won talent cultivated through a lot of practice. Robot skateboards, skaters who dress like matadors and ninjas, some incredibly good voice casting, the insecurities of seeing someone that you love surpass you inability—it’s simply a phenomenal feel-good show that has everything.
Available on: Funimation 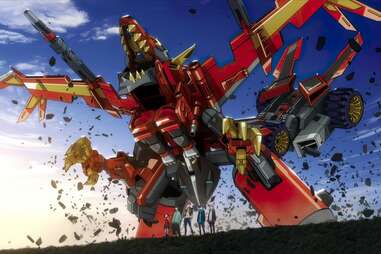 Release date: April 2
Director: Akira Amemiya
Animation production: Trigger
Unlike SSSS.Gridman’s “Special Signature to Save a Soul,” SSSS.Dynazenon leads with the true meaning of its acronym—“Scarred Souls Shine like Stars"—immediately announcing itself as an ensemble piece of five teenagers uniting to form the eponymous giant robot, battling monsters summoned by another group of adolescents called the Kaiju Eugenicists. (It’s also born out of extreme specificity, Episode 18 of the original Gridman: The Hyper Agent.) Dynazenon takes place in the same universe as Gridman, and addresses this through eerily replicating the framing of scenes, even bringing back some of its characters. It’s not just fan service, as Dynazenon slyly gives added meaning to reinterpreting the same imagery and framing, and even pokes fun at its own conventions. Just look at the score, where Evangelion composer Shiro Sagisu helps build the show’s maximalist spectacle out of just a handful of genre remixes of the same song. (It's worth noting that Trigger was formed by ex-Gainax staffers who worked on NGE.)

Dynazenon is just as gorgeously animated as its predecessor, frequently stunning in the quiet and loud moments alike, showing a great interest in exploring just why Dynazenon is such a lifeline for its lonely teens, and doesn't squash those narratives with its action. Studio Trigger's recognizable designs shine throughout, the sleek character drawings contrasting with the blocky, toy-like transforming robot (which is, appropriately, summoned with action figures). It’s all in service of an enlivening love letter to toku shows—so much so that they straight up made tokusatsu live-action shorts for the Blu-ray release. The director’s giddy enthusiasm for the shows of his youth is completely infectious, the emotional intelligence of its triumphant narrative and the quality of its visuals handily puts Dynazenon among the most exciting anime of recent years. Bring on Gridman X Dynazenon.
Available on: Funimation 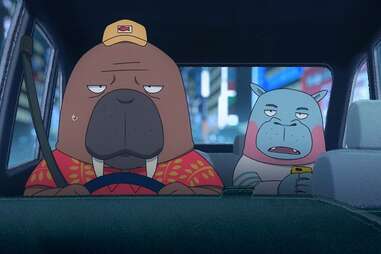 Release date: April 6
Director: Baku Kinoshita
Animation production: OLM, P.I.C.S.
The taxi driver Odakawa, a walrus abandoned by his family as a child, prefers to keep to himself even as he ferries a number of oddball passengers around every night. But lately, each car conversation somehow leads toward a missing girl. Mixing wry comedy and twisting mystery, Odd Taxi (based on the manga by Kazuya Konomoto, who also wrote the show) is deeply concerned with the messy business of opening up to relationships with others, with modern compulsions and futile endeavors. That includes fandom, the want for fame or viral infamy, and addiction to gacha games in one standout episode. Through Odakawa’s journeys, the modern interests of his passengers are deconstructed with amusing but thoughtful detachment, from the various dangers of the online space to the exploitations of the idol industry. At the same time, it slowly unfurls its central mystery with surprising and hilarious consequences (a payoff featuring capoeira is especially satisfying).

It’s all smartly written, with naturalistic and dryly funny conversations, and the excellent translation work is vital in maintaining the cadence of its little jokes and plays on words, even translating one character’s constant rapping so it still rhymes in English. The animation itself is subtle and the scenery has a lovely, textured look that grants each scene a down-to-earth grit to go with the corruptive allure of the city at night, and Odd Taxi’s hard-boiled, frequently sinister noir narrative. The cute appearances of its animal cast aren’t really in service of allegory; these looks simply embody their respective characters or serve as contrasts to their inner selves, and these design choices and many others dovetail perfectly with its writing. Odd Taxi weaves all of these elements and its intricate plot threads into an astounding conclusion that recontextualizes how you perceive the show as a whole.
Available on:Crunchyroll 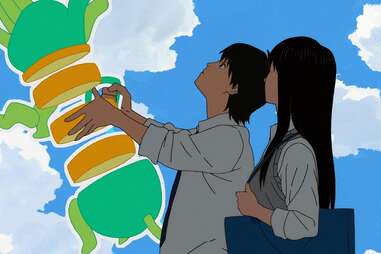 Release date: July 2
Director: Shingo Natsume
Animation production: Madhouse
A concept riffing on Kazuo Umezu’s horror manga Drifting Classroom (something which it winkingly acknowledges more than once), Sonny Boy starts heading the direction of Lord of the Flies real fast. In the midst of a slow summer vacation, one high school class has drifted into another dimension and students develop strange superpowers potentially linked to their new status as inter-dimensional castaways. From there, the plot gets dense; Shingo Natsume’s presentation of the show is slippery and obtuse, its first episode quite literally turning its own world upside down (and inside out). The constantly shifting laws, unexpected and strange visuals—changing into otherworldly shapes at any second, from a student shattering the screen into cracked glass, or folding the school into an Escher-esque nightmare—make Sonny Boy galvanizing and unpredictable with no hand-holding to guide you through what exactly is happening.

There’s a lot that differentiates Sonny Boy from its contemporaries—its sparse but extremely effective use of music, for starters. There are no cheery opening credits or room to prepare for each episode; it sort of just unfolds, boundary-less in the same way as it’s an inter-dimensional story. This mixture of teenage angst, philosophy, and freeform style reminds of Masaaki Yuasa, a sort of mentor to Shingo Natsume, who worked on Yuasa’s series similarly trippy The Tatami Galaxy (plus, Natsume is currently tapped to direct the upcoming Tatami Galaxy sequel). Despite those clear influences, it’s an idiosyncratic show—one that feels like it only could have been made by this team, at this time. More than just a ravishingly well-animated head trip, Sonny Boy is one of the coolest shows of the year.
Available on: Hulu, Funimation 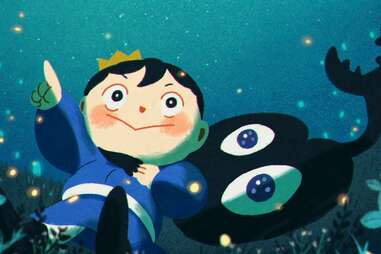 Release date: October 15
Director: Yōsuke Hatta, Makoto Fuchigami
Animation production: Wit Studio
Based on the manga by Sōsuke Tōka, Ranking of Kings tells the story of Bojji, a courageous young prince who must overcome a world that fails to see his worth because of preconceived notions around his deafness and lack of physical prowess. The unspoken understanding between Bojji and the aggressive, cynical shadow Kage is surprisingly endearing, as one of the only characters who doesn’t simply pity Bojji, and attempts to actually make the effort to communicate with him rather than demand that he work around them. The lessons about strength of the heart trumping strength of the arm is familiar, but it’s the manner of Ranking of King’s presentation that feels sublime, leaning heavily into visual communication over the usual didactic, play-by-play narration that a lot of anime can get bogged down in. That decision is realized in style, too: Its playfulness with perspective and cute, storybook-style drawings contrasted by chunky lines and gentle pastels immediately make a striking impression, as though the show were a fable come to life. The consistent animation quality is both cartoonishly elastic in the movements of its characters as well as nuanced, from the buoyant spring in the step of the deaf and mute Prince Bojji to the various nuances of the characters' expressions. The story itself is unique and endearing, one concerned with social stigma and lack of understanding towards disability often overlooked in TV at-large, especially within a fantasy setting such as this. With its various idiosyncrasies tied to a winning, incredibly moving story, Ranking of Kings is handily the year’s finest, worth seeking out whether you’re an anime fan or not.

3
Please log in to like, share and comment!
Categories
Read More
Uncategorized
How Beneficial OG0-061 Dumps Are For your OG0-061 Exam Preparation?
Get IT4IT Certification Certified To Boost Up Your Career! The Open Group is a globally...
By Oliver James 2019-10-17 11:12:24 0 333
Uncategorized
Get MS-301 Braindumps & MS-301 Real Exam Questions
Get 100% New and confirmed Microsoft MS-301 test dumps to finish your Microsoft confirmation test...
By Dumpspdf Pdf 2020-04-03 11:23:49 0 224
Uncategorized
Basic requirements to register a private limited company in Electronic City
) In Pvt Ltd Company Registration in Electronic city There should be a minimum of two...
By VIgnesh KKK 2021-04-29 06:23:47 0 131
Other
The benefits of cannabis seeds are numerous
The classification of plants is herbs. One of these is marijuana. Cannabinoids affect the central...
By Cannabis Seed Bank 2022-09-21 10:56:04 0 3
Other
Blood Cancer Market developing Industry Impact, Emerging Technology and Future Forecast
Blood Cancer Market Analysis and Size According to a survey by Bristol-Myers Squibb,...
By Raj Gupta 2022-09-19 12:54:02 0 1