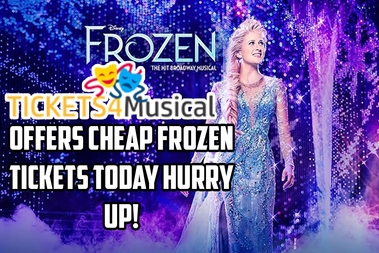 Broadway melodic Frozen has discovered its new Elsa and Anna.

Makers reported in a tweet Wednesday that Ciara Renée and McKenzie Kurtz will play sisters Elsa and Anna, starting in February.

"As we approach our second commemoration on Broadway, we're eager to declare @mckenziekurtz and @CiaraRenee as our new Anna and Elsa!" the post peruses.

Renée, an on-screen character who recently showed up in Broadway preparations of Big Fish and Pippin, praised her throwing on Twitter.  Buy your Cheap Frozen Tickets today at Tickets4Musical.com.

"It's legitimate! Can't hold on to join this cast and this lovely show!" she composed.

Renée and Kurtz will supplant Caissie Levy and Patti Murin, who started the jobs on Broadway. Duty and Murin will leave Feb. 16, with Renée and Kurtz to start exhibitions Feb. 18 at St. James Theater in New York.

What's more, Ryan McCartan will succeed Joe Carroll in the job of Hans. McCartan made his Broadway debut as Fiyero in the melodic Wicked.

"I'm going to be Hans in @FrozenBroadway - my exhibitions start in February!" the entertainer tweeted. "I'm just fit for playing miscreants and sovereigns. Come watch me do the main two things I can do, however this time, at the same time!"

"I'm going to be Hans in @FrozenBroadway - my exhibitions start in February! I'm just fit for playing scalawags and sovereigns. Come watch me do the main two things I can do, however this time, at the same time! ️ pic.twitter.com/9AnLdrhygi—Ryan McCartan (@ryanmccartan) January 15, 2020"

The Frozen melodic depends on the 2013 energized Disney film of a similar name, which includes the voices of Idina Menzel and Kristen Bell as Elsa and Anna. A continuation, Frozen 2, opened in theaters in November. Tickets4Musical offer Cheapest Discount Frozen tickets for you.

The Frozen melodic highlights music and verses by Kristen Anderson-Lopez and Robert Lopez, and a book by Jennifer Lee. The melodic appeared on Broadway in March 2018, and propelled a national visit in November.